What makes Charles Lindbergh an aviation pioneer?
Charles Lindbergh wasn’t frightened to stand up to conventional wisdom, making choices based on his own careful research that allowed him to take what many considered a risky path to achieve his goal of winning the Orteig Prize.

What kind of man would live where there is no danger? I don’t believe in taking foolish chances. But nothing can be accomplished by not taking a chance at all?
— Charles Lindbergh

In the 1920s, aircraft engines were still considered unreliable. With most of the flight over the hostile North Atlantic, most pilots eyeing the Orteig Prize felt a large trimotor with a multi-person crew would have the greatest chance of succeeding in making the long crossing from New York to Paris.
The Orteig Prize was created by Raymond Orteig, a French-American aviation enthusiast, and philanthropist. In 1919, after Alcock and Brown successfully crossed the Atlantic in a modified WW1 bomber, he offered a $25,000 prize (about $375,000 in 2020 dollars), for the first nonstop flight between New York and Paris.
A few years later, Giuseppe Bellanca, an Italian immigrant aircraft designer set to work designing an airplane suitable for long-distance overseas flights. Like Lindbergh, he recognized that technology was catching up to expectations.
For his new airplane, he selected the most reliable engine available, the Whirlwind J-5 designed and built by the company created by the Wilbur and Orville Wright. Bellanca designed the aircraft, the Wright-Bellanca WB-2, which was built by the Columbia Aircraft Company. It large fuel tanks for range (and to provide flotation in case of a water landing) and jetisonable landing gear to prevent flipping when ditching.
While many people considered the idea of a solo transatlantic flight in a single-engined aircraft foolhardy, Charles Lindbergh demonstrated why he is an aviation pioneer: He challenged the conventional wisdom and recognized that the Wright-Bellanca WB-2 would have the reliability and range necessary to fly between New York and Paris. Also having just one pilot on board and one engine to feed would help reduce weight helping him to increase range and margin.
In 1926 Lindbergh convinced a two businessmen in St Louis of his plans and raised the necessary money to buy Bellanca’s airplane. He set out to buy the aircraft, but the manufacturer, Columbia Aircraft, balked at the idea of having an unknown pilot fly the aircraft and insisted on choosing their own flight crew.
Undeterred, Lindbergh persuaded the Ryan Aircraft Company in San Diego modify one of their aircraft to his specifications. Using a similar formula to the Bellanca’s WB-2, Lindbergh chose a single-engine high-wing monoplane design, and employed the same Wright Whirlwind J-5 engine that powered the WB-2, and incorporated additional fuel tanks for range.
While Ryan was building Lindbergh’s airplane in San Diego, Bellanca’s WB-2 set an endurance record in April 1927 by flying over Roosevelt Field in New York City for 51 hours. That record breaking flight, flown by Bert Acosta and Clarence Chamberlain, was fifty percent longer than Lindbergh’s planned transatlantic flight.
No doubt reassured by the WB-2’s performance, the twenty five year old Lindbergh set out to fly solo across the Atlantic in May of 1927. Thirty-three hours later he landed in Paris and changed history, connecting New York and Paris by air for the first time.
Charles Lindbergh showed us what makes him an aviation pioneer.
Unlike many of his competitors, he made the decision to fly solo, avoiding the personality conflicts that plagued other groups. He recognized that range and endurance was important and deliberately chose an airplane powered by a single engine rather than the fuel consuming redundancy of a trimotor. To further save weight he dispensed with radios, sextant, and a parachute. Finally, as an experienced Air Mail pilot used to flying in weather, he took off into conditions that were clearing, but considered not clear enough for his competitors.
Sometimes progress can only be achieved by challenging accepted ideas and taking a long dispassionate look at the status quo. By redefining what was important and recognizing the advancements that technology provided, Lindbergh became the first to cross the Atlantic nonstop between New York and Paris, winning the Orteig Prize and forever making his mark in history. 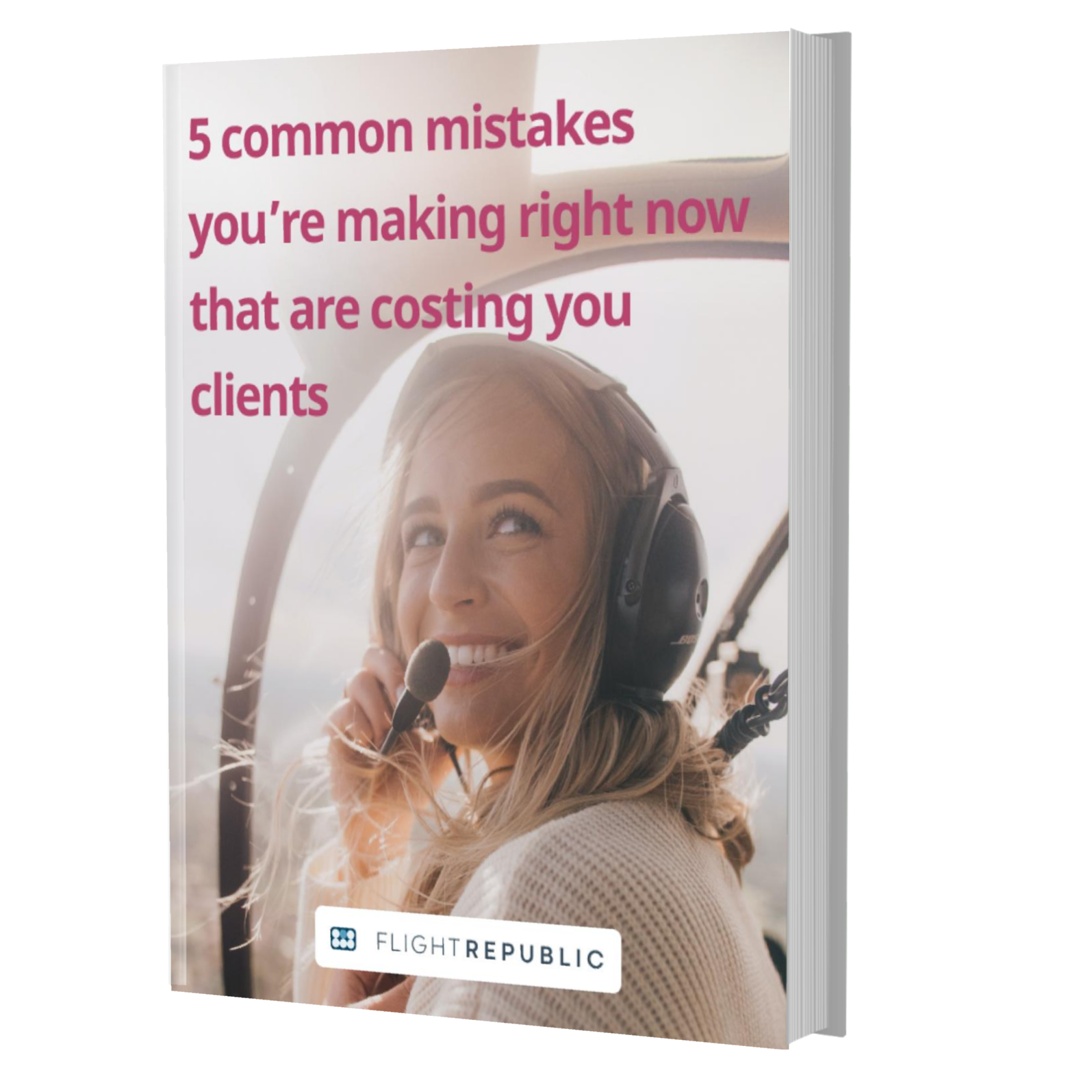 Are you ready to graduate more pilots and grow your school?

Download our FREE e-book to learn five simple things you can do to today to engage more clients.